A documentary narrative of the worst natural disaster in Montana history:
the 1964 flood on the Blackfeet Reservation.

Dozens of interviews, 120 hours of source material, 5 years of work. All to tell the story of 50 years of healing.

It was so long ago, yet still so real to all who survived the worst natural disaster in Montana history. The Blackfeet Flood shares stories of community and family as we visited the “flood homes” of the Blackfeet Reservation.

Hear from the project team and attendees below. Learn more about this project at sixtyfourflood.com/.

a driving rain buckled dams and flooded vehicles on the Blackfeet Reservation, sweeping crying children from mothers’ arms, and ferrying homes and bodies across the prairie. The flood destroyed hundreds of homes, wiped out cattle herds, and killed 31 people on the eastern slopes of the Rocky Mountains.

More than a half-century after the worst disaster in Montana history, Butch New Breast returned to the Blackfeet Reservation to confront the tragedy that claimed the lives of his father, mother and little sister. In the weeks after the flood, 14-year old Butch left the reservation, putting miles between himself and the tragedy; after decades of drifting through cities and states in the western U.S., Butch returned to the reservation. His return reunited him with old family and friends, and a place whose memories had grown distant. In his return, Butch must confront the tragedy and determine if he can remember “what it means to be Blackfeet.”

From time to time, Butch saddles his horse, rides down the foothills of the Rocky Mountains, weaving through the scrub pines and past the balsamroot, out onto the broad expanse of Montana prairie, in search of the bodies of his mother and sister.

“They have a chance of surfacing, you know,” New Breast said, hopeful. “The wind blowing the dirt o the top of them one of these days … “

The narrative of Butch’s return to his family’s lands will connect with anyone who has wrestled with anyone who has wondered whether they can ever truly go home again. His desire to find the missing bodies of his mother and sister adds an unmistakable pathos to his homecoming, and his solitary rides across the prairie – set against the backdrop of the towering Rocky Mountains – are picturesque and haunting.

Over the course of four years, Benjamin Shors and Torsten Kjellstrand with Sixty-Four Films followed the compelling story of a Blackfeet man and woman facing the ghosts of their past with resolve, courage, and humor in the half-hour documentary film The Blackfeet Flood.

“We are honored to have been able to work with members of the Blackfeet Nation to record these important stories,” Shors said. “The preservation of Butch’s story is important to public television audiences and to generations of Blackfeet people to come.”

In addition to the documentary film slated for national broadcast on public television in spring 2019, Sixty-Four Flood created six documentary short films and a place-based mobile app that allows for community storytelling. The short films are streaming on PBS.org and the film’s website, sixtyfourflood.com. The mobile app is available for download on Android, iPhone and tablet devices. To get the mobile app, visit your app store and search for “Blackfeet 1964.” You can view the app at home or drive the route on the Blackfeet Reservation.

Learn more about the film and its history at the following link: https://sixtyfourflood.com/ 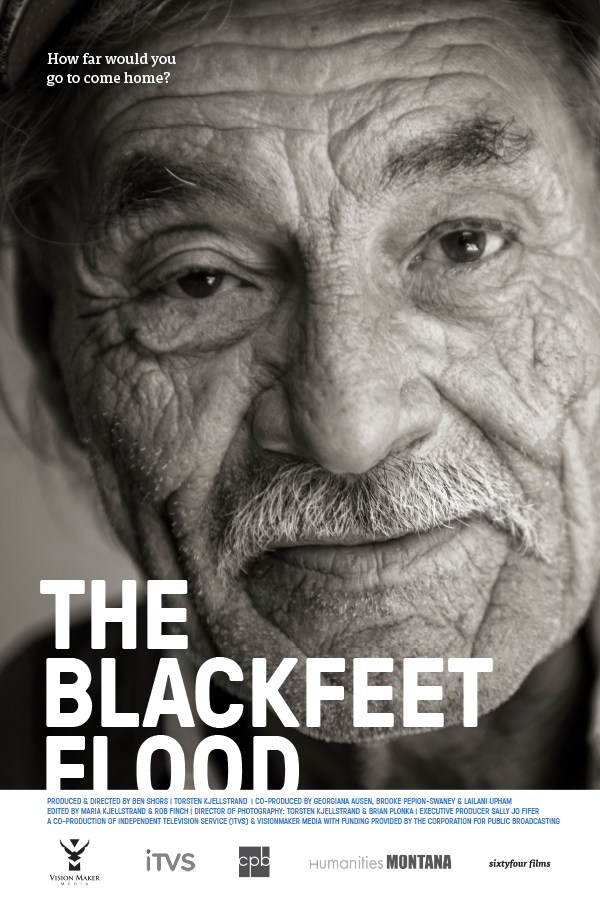