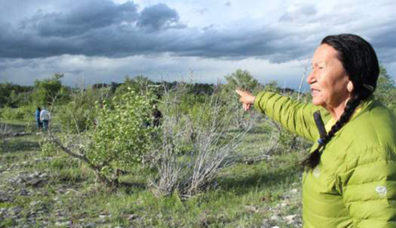 The 1964 Flood will be coming to a TV set near you. Vision Maker Media has announced it has an additional media grant to fund a 30-minute version of this film for PBS stations. The Murrow team will be back in the field this summer with hopes of having the project ready for release in the Spring. The project chronicles the disaster of June 1964, when heavy rains and the collapse of two dams in northwestern Montana resulted in the deaths of 29 people and relocation of hundreds on the Blackfeet Indian Reservation.

“Not only was the flood a terrible disaster, it’s also one of the least understood, untold stories of 20th-century Montana,” said Benjamin Shors, a clinical associate professor at The Edward R. Murrow College of Communication at Washington State University who is working on the documentary with co-producer Lailani Upham. “We want viewers and students to understand what happened in 1964, but we also want to document what happened to people in the years that followed.”

This project has been unique in that the film is accompanied by a mobile app that is available for free on iPhone, Android and tablet formats, that presents place-based short films, survivors’ stories, text, historical documents, and images. (Find more at http://sixtyfourflood.com) GPS coordinates in the app allow visitors to the flood sites to open pertinent videos. Interactive technology lets users upload responses to a database. To get the app, users can visit their app store and search for “Blackfeet 1964.”

This is a segment from the documentary, Sixty-Four Flood.

You can watch the other segments of the documentary at PBS Indies: Sixty-Four Flood